I haven't posted anything these last few weeks because I was busy hacking away at a Revell 1:72 scale model kit of the space shuttle Discovery. Now I am by no means an accomplished modeller - I used to build the odd kit now and then in my younger days but I haven't touched a single model kit in years. Lately, however, I started to get the itch again and started off with a 1:35 scale Tamiya German Sdkfz222 which is not yet finished - I'll have a post on that when it is. Following that I went for the Shuttle.

Now you might think that a 1:72 scale model of the shuttle is a lofty goal for a quasi-rookie and you would be perfectly right.  In fact, the first thing I immediately realised was that I was way out of my depth here.  However, after a zillion youtube visits, I began to understand the ways of the 21st century modeller and by hook or by crook somehow managed to finish the model complete with a small with diorama base. At this point I should acknowledge DaveG’s input and handy advice whenever I was faced with some sort of dilemma during the build. But there's a story behind this model and the real reason for attempting such a large one is - I am ashamed to say - a direct result of my dereliction of duty. So I'll take the walk of shame in atonement...….

Thirty or so years ago (yes, that's right - three zero, thirty), my brother in law knocked on my door with an extra large box in his arms.  Seeing I was into modelling and he had no inkling of the hobby at all, would I be kind enough to put together his new space shuttle model kit? Not being one to refuse a challenge (and you can't really upset your newly wed wife's brother now can you?) I said sure and was left with this overgrown baby sitting on my lap. I got around building most of the model and then passed it on to Dave who was an already an experienced airbrush user (whereas I didn't even have one at the time) but for a million reasons, not one drop of paint landed on the model and as a result it was gone and forgotten in the labyrinth of his industrial garage. The poor thing lay there, lost and forgotten until a casual remark a couple of months ago reminded me that one space shuttle delivery was way, way overdue.

So I set around trying to pick up where the project had been left off but alas! the model was discovered under a pile of stuff with a three inch hole in one of the wings. I never knew asteroids could do such damage! So that set me off on ebay trying to find one of these models which by now have become almost vintage.  Anyway, I managed to find one from the US for 65 bucks but by the time I had factored in the shipping costs and VAT, I ended up forking out way more than a hundred euros. Such is the price of complacency I suppose!

The large box arrived quickly enough and the build itself was enjoyable, enabling me to gain loads of experience. At slightly more than 19 inches in length, the Shuttle was a bit challenging sometimes but I somehow managed. Airbrushing was especially harrowing since there was so much masking to be done with those black and white sharp boundaries but worst of all were the decals.  The model is from the nineties so with age the decals were simply disintegrating and it is truly miraculous that I managed to pull them off (although close inspection reveals some of the defects which were impossible to hide).

Anyway, the build is now finished and I hope to deliver sometime in the next few days. I'm not sure what the reaction will be but, hey, space trips can be quite long can't they? 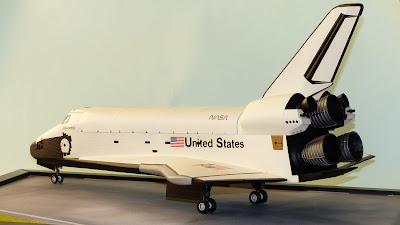 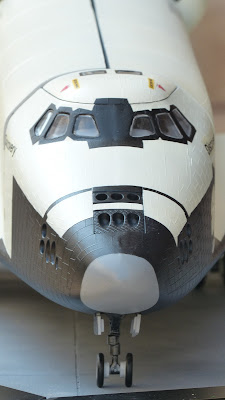 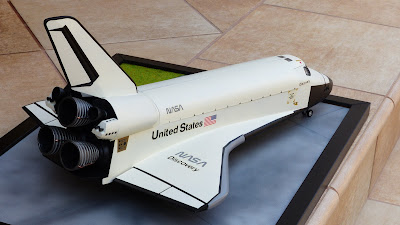 Now that this one's ready I've moved on to my next space build - an Airfix 1:72 scale Apollo Lunar Module.  Given that it's the 50th anniversary of the first moon landing next month I thought it would be the most appropriate model to build right now. But more of that in a future post...….