Hi again.  This is the final part of our ESR Teugen Hausen refight. Last post we left the French (Friant's division to be precise) in control of the heights opposite Hausen with St Hilaire's division deploying to their rear. At the Austrian end, Lusignan's division was badly mauled and routed entirely with so much accumulated fatigue that it wasn't even worth rallying. So Austrian command resolved to let it go without even attempting some sort of recovery. At this point we carried on........


The next two moves are used by both sides to dress their ranks, deploy artillery and generally glare each other down. It is now early afternoon.


At this point Vukassovich received orders to engage St Hilaire's division opposite him.  Saint Hilaire was still partly deployed with more than half his division still in march column and the Austrian intent was to catch him unawares.  Moreover with the French division partly deployed there was a greater possibility of success for the numerically inferior Austrians.


On the other side of the table, Rosenborg receives his marching orders to move to the aid of Hohenzollern, His troops move out from around Dunzling.

At this point we made some quick calculations.  Rosenborg was at least an hour's march away and needed at least yet another hour to deploy. Furthermore, according to the scenario instructions it would be at least an hour before the Austrian side became eligible to call up two elite grenadier divisions which were held off table in reserve.  Allowing for a quick successful call (improbable) for reinforcements, the grenadiers would need another hour at least to march to the front and deploy. Therefore the French had well in excess of two hours (six moves) before possibly being threatened to the rear by Rosenborg and to the front by any potential reinforcements.  In those two hours Saint Julien's division was practically alone to face the entire French force.

So it became very clear that the French would easily sweep through the weakened Austrians to their front and deal with either Rosenborg or the reinforcements (assuming they arrived) piecemeal.

Clearly the result would be a foregone conclusion so we decided there was no point in continuing. The wide split in the Austrian army and the considerable distance between the two corps proved their downfall and the French would easily brush aside all resistance and march to safety.

I am still very much undecided about ESR to be honest.  Ideologically, they are a fine set of rules but I find them to be very economical with the detail and clarifications necessary to play the game without having to interpret many situations.  It is true that there are many examples of play contained in the rulebook but they can hardly cover all situations.  Sometimes a well-placed phrase or sentence goes miles to give a clearer picture of the game mechanics.  I also find that limiting artillery range to 900 yards whereas an infantry unit moves 1125 yards in one move means that most infantry will keep out of range and advance to contact in one move without suffering any bombardment on their approach - once in contact they will take one round of artillery and skirmish fire plus close range fire during the combat phase (canister fire is integrated in an artillery battery's Combat Rating). Having said that however, I still think they are a very good ruleset which could have been excellent had there been a little bit more attention to explain that little bit more clearly.

This will probably be my last post for this first year of my blog.  I must say I am enjoying posting and thank you all for taking the time to visit.  A Merry Christmas to you all and a very Happy New Year, of course.  Happy gaming and hope to see you all visiting once more in 2019!

We met once more to reprise our refight of Teugen-Hausen using the 'Et Sans Resultat'' Napoleonic ruleset.  In the first part of this narrative we left the French III Corps under Davout marching westwards towards Teugen whilst the Austrian III Korps under Hohenzollern defended the heights around Hausen. Further east, Rosenborg's IV Korps marched north towards Dunzling to engage any French forces there and block any possible outlfanking maneuvre. 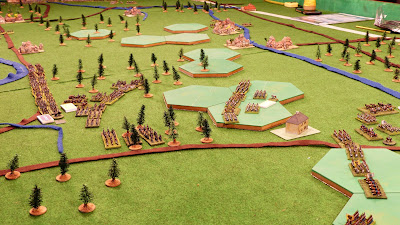 Friant's division (centre, left) is now almost fully deployed while to its rear St Hilaire arrives in support but still in march column. On right, the Austrians opt for a static defence and remain in situ.


And that's where we left it for the week.  Hopefully we'll wrap it up next session when the two titanic divsions of Friant and Saint Julien will presumably clash. The Austrians are entirely fresh and have a distinct advantage in artillery while the French have racked up some fatigue following their struggle with Lusignan.  However, the French should make up for it with their superior quality and with having the entirely fresh division of St Hilaire to the rear.

As I have mentioned in previous posts, I sometimes dabble in the 28mm scale just to enjoy painting the beautifully detailed figures that are available out there. This unit of Perry Dutch Guard Lancers is depicted at Waterloo with their leader - General Colbert - having one arm in a sling.  Colbert was wounded the day before and fought the battle of Waterloo with his wound dressed. The unit is an absolute joy to paint and the detail on the figures is outstanding. I must say they look very nice in my display cabinet!