History tells that Napoleon Bonaparte landed in Malta in June of 1798 on his way to Egypt and in the seven days he stayed here he revolutionised the entire legal and social systems and abolished slavery. He was so ahead of his time that some of the laws he established then are still in force today! Bonaparte sailed to Alexandria on 19 June, never to return.
Or so you thought.
Some local newspapers this week reported that famed director Ridley Scott (Alien, Gladiator, Kingdom of Heaven, Black Hawk Down, The Duellists, gosh the list is endless!!!) is shooting his new movie Kitbag in Malta.Or parts of it at least. The subject? Napoleon’s early years and his ascent to power culminating in Austerlitz.  The Emperor returns! Huzzah!
Scott shot most of Gladiator here in Malta back in 2001 or therabouts with Russel Crowe and Joachim Phoenix so it’s not too surprising that Phoenix will be returning to Malta as well interpreting the part of Napoleon. When shooting Gladiator Scott enlisted hundreds of locals as extras for crowd scenes and such so it’s logical to expect that a similar number of people if not more will be needed to re-enact Napoleonic  troops and civilians. With this in mind me and my mates - most of whom are very experienced Napoleonic re-enactors and have travelled most of Napoleon’s battlefields - will be keeping our eyes and ears open for opportunities to take part in the film. One thing is certain - at 5’5” or thereabouts don't expect to see me as a Grognard!
If this materialises filming wouldn’t start before next year probably. In the meantime, watch this space...... 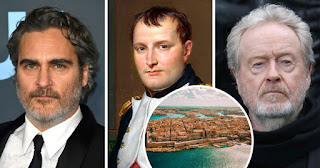 It's been some time since I last posted - a mixture of other priorities, working at my desk, carrying out loads of home maintenance and sheer downright disinterested laziness. Maltese summers are punishing - this one particularly so - and drains most of one's energies except to go to the beach or drink ice cold beer when it gets a bit cooler in the evening. The Euro Cup and Olympics didn't help either!

But enough excuses. The reason I am writing again is that finally - and I stress the word finally - I have managed to finish my Hobby Boss 1:35 scale Panzer 1 Ausf A.  It's been four months in the making (shame on me!) but here it is at last.

I must say it was a shame to lose a lot of the interior detail but unfortunately that's how it is with AFV's. The engine cover although not cemented is firmly kept in place by the exhaust pipes and rear viewing port and if removed it can easily scratch or break some parts. So again, all the engine detail is lost from viewing -  thank goodness I took loads of pics before sealing it in!  Still haven't decided if I should put the model on a base. Probably I will but I just want to get it out of my hair now and start something else straight away while the mojo's back.

Hope it won't be another five months to the next post!!!