To complement my British Peninsular units I am mustering some Spanish and Portuguese units.  Actually, the word 'some' is a bit of a misnomer since the unpainted lead I got recently from Baccus is anything but ! Anyway, this week I got eight Spanish infantry stands off the painting desk, just shy of a hundred figures, representing the 7th 'Zamora' line regiment with black facings and the 8th 'Soria' regiment with purple facings. I am not aiming for any particular historical scenario so I am choosing units at my whim.  Unfortunately Spanish army organisation was quite chaotic between 1805 and 1812 and OOB's are rarely complete and accurate so it is quite useless to invest too much time in researching in too much detail as very often there is none to be found ! I am mostly using Steven Thomas's excellent site at https://balagan.info which contains a wealth of information on Spanish army uniforms and organisation during the French invasion and the Peninsular War.

As usual, units are based for Age of Eagles on bases 3/4"frontage by 1" depth with twelve figures to a stand.  Baccus come in strips of four so they fit in almost exactly to one base frontage.
There were nominally three battalions per regiment in 1808 but there was no such thing in real life and no more than two would actually see the field.  The first battalion would have two grenadier companies which would sometimes be hived off (as per the Austrian model) into separate units and the rest of the battalion would then join other fusilier units orphaned of their grenadiers into ad hoc formations.  To mirror this as much as I could I put one stand of grenadiers for every three of fusiliers - this should give me the ability to muster the grenadier stands separately if necessary. The figures shown wear the 1802 / 1805 model uniform with bicornes and white jackets in regimental facing colours while drummers wear blue jackets piped in red. Officers carry a crimson sash, presumably to impress the senoritas !

Apart from the regular units there was a plethora of irregular militia and guerilla units, mostly in civilian clothes or brown jackets.  Information on such units is sparse, however, and honestly it is doubtful how useful such units would be on the wargames table so I am not sure if it is worth going into much depth in this area.

Just a short post to wish you all a merry Christmas and a great new year. I know it’s kind of cliche’ but there you go......

Oh, and happy gaming and painting throughout 2020.

Keep well eveybody and God bless. Thank you all for your readership, comments and support.
8 comments:

These past few weeks I have been mustering a 6mm British Peninsular army from Baccus.  Painting sessions have not been too regular but I am finally in a position to field a small army for Age of Eagles (AoE in short). I managed 54 infantry stands, eight artillery batteries, and 16 cavalry stands.  At AoE's scale of 360 infantry and 180 cavalry per stand, this would translate into a small army of 19,440 infantry, 2,880 cavalry, and 48 guns - each battery having 6 guns. In terms of figures, each stand contains 8 infantry figures and 3 cavalry figures, so with the artillery that's in the region of 500 figures, all told.

True to form, Baccus make very detailed napoleonic 6mm figures - it's amazing how they manage to fit in so much detail in such small figures - so hats off to Peter and his team for the quality of their product. It is a shame that they are pretty much larger than Heroics and Ros so they are not really compatible but to be honest this lack of compatibility doesn't show that much once the figures are on table.

Although AoE is brigade level and doesn't really go into the nitty gritty of lower organisation, I still opted to organise the troops into battalions (two stands = 720 men), with four stands to a regiment at 1,440 men.  I made this choice mainly because of the various facing colours which distinguish the different regiments and their regimental flags. The result was a lovely array of coloured regimental standards accompanied by their respective King's Colours.

I staged a few photographs to give an idea of the finished figures.  There's still quite a pile to finish as well as a lot of Spanish and Portuguese to complement the Brits.  Maybe they will feature in a future post.  For the moment, however, here are the Brits that I've managed up to now, stovepipes and all. 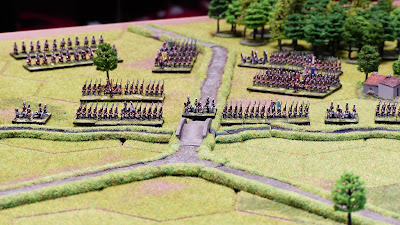 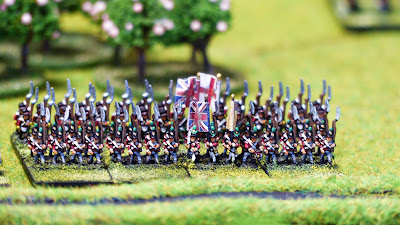 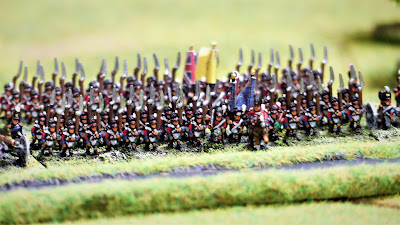 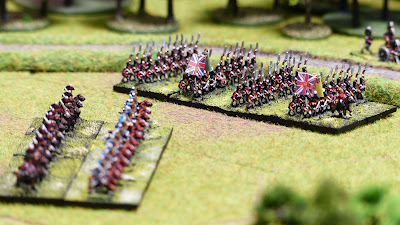 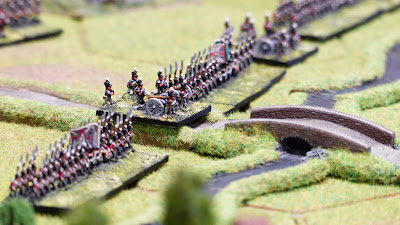 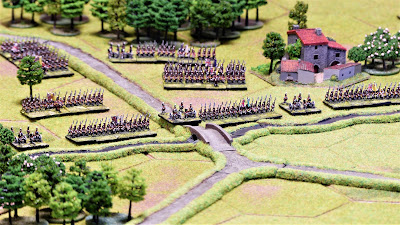 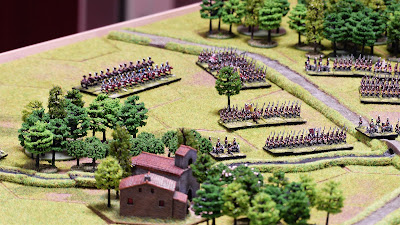 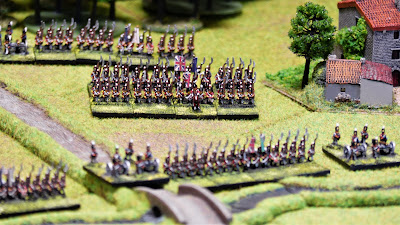 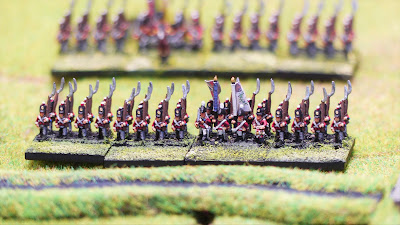